CITY POLICY:
“It is a policy of the City Council that new development projects are required to provide an artistic interpretation of the City’s heritage which portray relevant representations of historic events and are accessible to the general public” - Source: SJC City Council

The following photos are some of the depictions and interpretive panels in the downtown area:

Located at the corner of Ortega and Del Obispo is Stroscher Grove. Among the young orange trees, you will find the three pedestals showcasing ceramic tile panels. The three triptychs depict the history of the early settlers in the Capistrano Valley: The first panel illustrates the Ajachemen people, who arrived in the Valley c. 8,000 BC,  the second panel features the Spanish missionaries and rancheros, 1776-mid 19th Century,  and the third panel portrays settlers from the United States and Europe, mid to late 19th Century, represented by Frederica and Wilhelm Stroschein, who settled the land in 1887.
Location -  The corner nearest the Inn at Ortega and Del Obispo

The plaque says the building was a home and restaurant and built by the Arbonies who were from the Basque region of Spain. It was known as Nick’s Café. 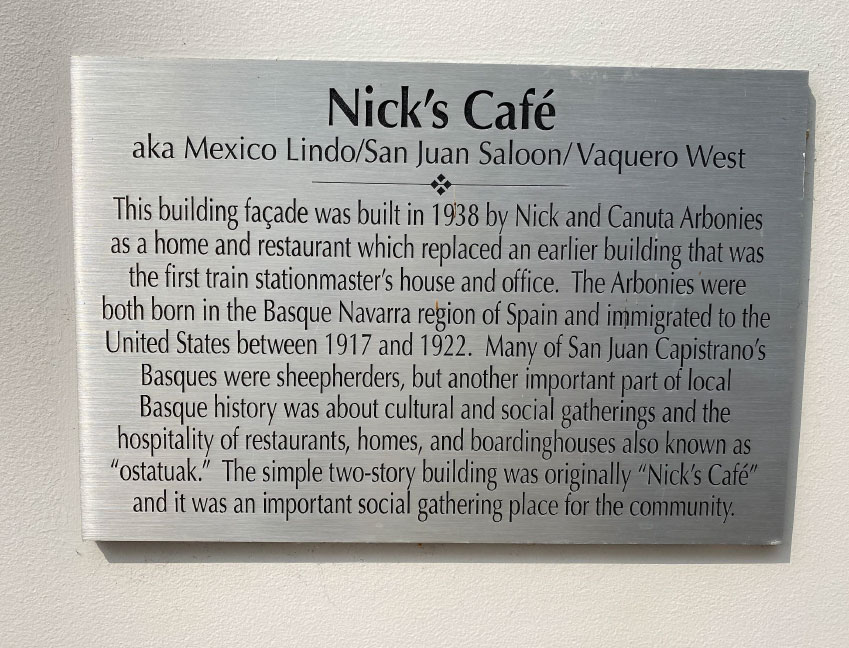 Historical Depiction at the Franciscan Plaza

The plaque describes the colorful history of this site. In the early 1880s, homes for prominent early founders of San Juan were built similar to the Manual Garcia Adobe still standing to the South.  The site was the scene of some “firsts” in San Juan including a telephone switchboard and electrical generator 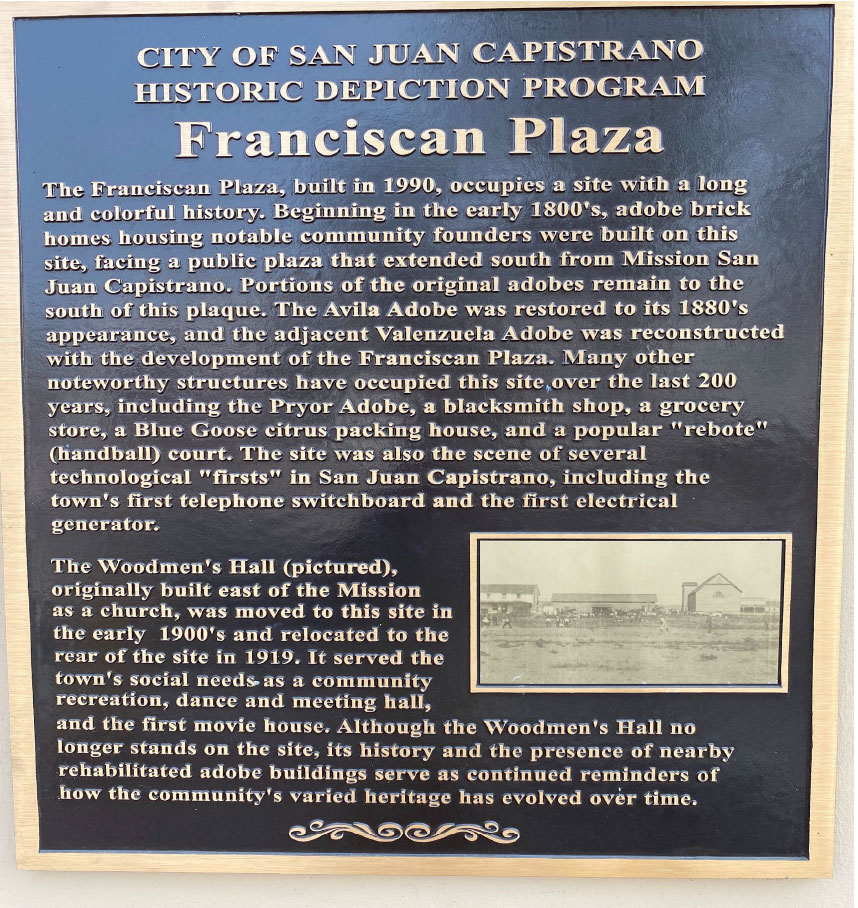 By the Inn at the

A story of the Missions

Depicted is the story of the 700 miles of El Camino Real and how it linked the 21 California Missions from San Diego to Sonoma. Did you know that “The King’s Highway” was strung with over 450 iconic Mission Bells along its route.  A very informative plaque indeed. 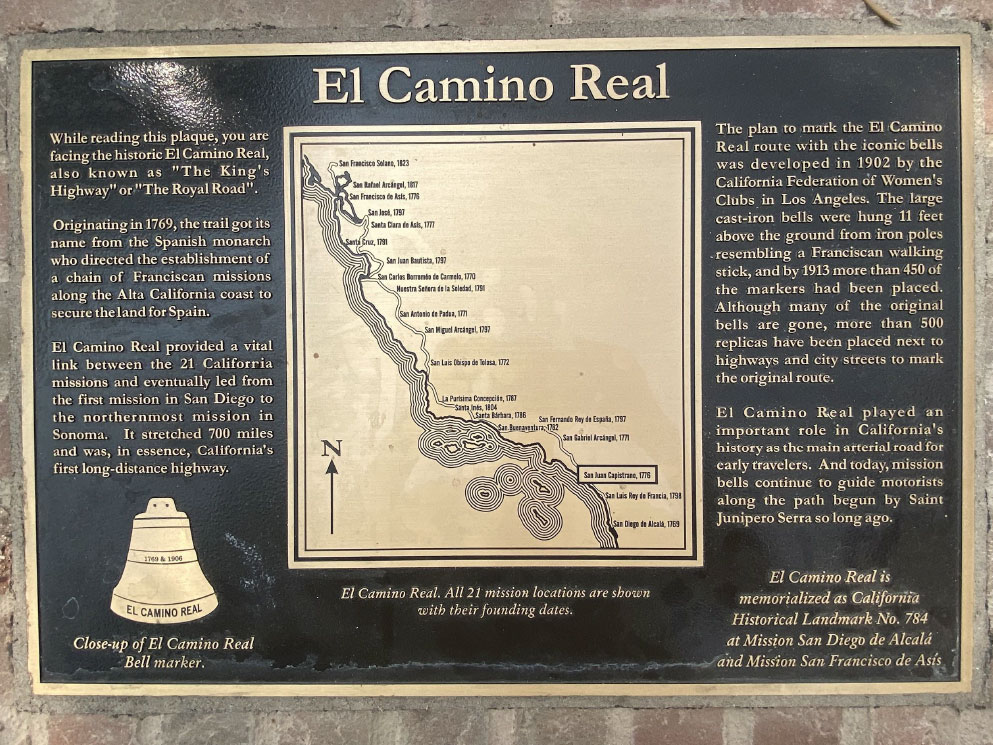 Posted on the Mission Wall

Mission San Juan Capistrano by the OC Historical Society “The Mission welcomes people from all over the world and a good proportion of the visitors are International. Mission San Juan, having been founded in 1776, holds the ruins of the "Great Stone Church”. 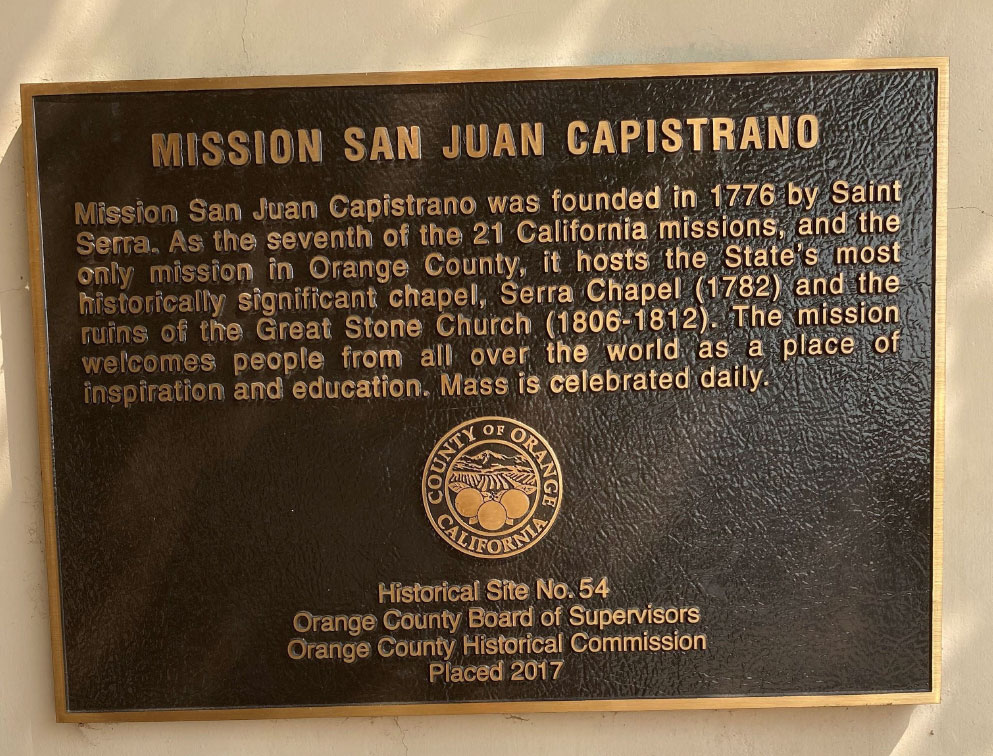